The Canticle of Mary, also called The Magnificat, appears below both in English and in Latin. 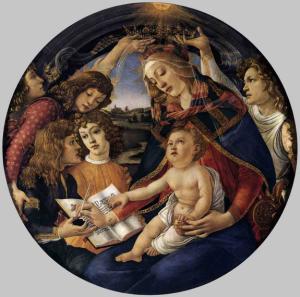 My soul magnifies the Lord,
And my spirit rejoices in God my Savior.
For He has regarded the low estate of His handmaiden,
For behold, henceforth all generations shall call me blessed.
For He who is mighty has done great things for me, and holy is His name. And His mercy is on those who fear Him from generation to generation.
He has shown strength with His arm:
He has scattered the proud in the imagination of their hearts.
He has put down the mighty from their thrones,
and exalted those of low degree.
He has filled the hungry with good things;
and the rich He has sent empty away.
He has helped His servant Israel, in remembrance of His mercy;
As He spoke to our fathers, to Abraham and to His posterity forever.

Glory be to the Father and to the Son and to the Holy Spirit.
As it was in the beginning, is now and ever shall be, world without end. Amen

About the Canticle of Mary,

The Magnificat [Latin: magnifies], also called The Canticle of Mary, is recorded in the Gospel of Luke (1:46-55). It is the Virgin Mary's joyous prayer in response to her cousin Elizabeth's greeting (Luke 1: 41-45). This great hymn forms part of the Church's prayer in the Divine Office (Liturgy of the Hours). When it is recited as part of the Divine Office, it is followed by the Gloria Patri ("Glory be"). The traditional sung Magnificat is Latin plainchant. One of the hymn's most glorious musical renditions is the version of the Magnificat by J.S. Bach.

The Catechism of the Catholic Church describes the Magnificat as "the song both of the Mother of God and of the Church" [CCC 2619], and explains this prayer's significance:

Mary's prayer is revealed to us at the dawning of the fullness of time. Before the Incarnation of the Son of God, and before the outpouring of the Holy Spirit, her prayer cooperates in a unique way with the Father's plan of loving kindness: at the Annunciation, for Christ's conception; at Pentecost, for the formation of the Church, His Body. In the faith of His humble handmaid, the Gift of God found the acceptance He had awaited from the beginning of time. She whom the Almighty made "full of grace" responds by offering her whole being: "Behold I am the handmaid of the Lord; let it be [done] to me according to Thy word". "Fiat": this is Christian prayer: to be wholly Gods' because He is wholly ours. [CCC 2617]

The above is taken from: http://www.wf-f.org/Magnifi.html

The icon is The Madonna of The Magnificat, 1480-81, by Sandro Botticelli